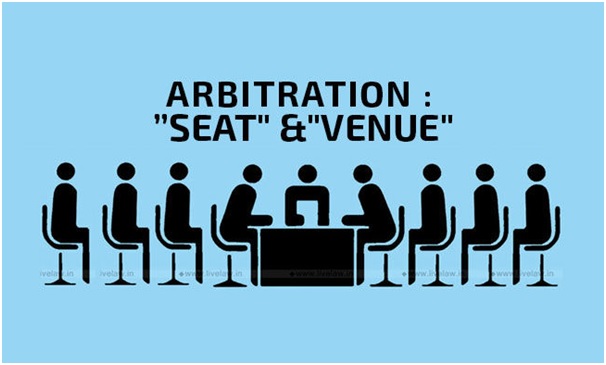 The legal quandary between the ‘seat of arbitration’ and ‘venue of arbitration’ vis-a-vis territorial jurisdiction of a ‘Principal Civil Court’ to entertain a petition challenging an award under Section 34[i] has been succinctly elucidated in the recent judgement delivered by the Hon’ble Punjab and Haryana High Court in the case of Adie Browson Breweries Pvt. Ltd. Vs KLA Constructions Technologies Private Limited[ii], whereby, the Hon’ble High Court has rightly inferred that ‘Venue of Arbitration’ does not imply ‘Seat of Arbitration’, in absentia of any express or implied consent of the parties to the agreement and the arbitral award challenged under Section 34[iii] very well falls within the contours of the ‘Principal Civil Court’ to which the exclusive territorial jurisdiction has been expressly conferred to by the parties to the contract.

RELEVANT PROVISIONS OF THE ACT[iv]

Before delving into the brief facts of the case it is imperative to read out the relevant provisions of the Arbitration and Conciliation Act, 1996, inter alia, the basis of the decision arrived at by Hon’ble Justice Deepak Sibal, which is the interplay of Section 34, Section 20, Section 2(1)(e), and Section 31(4) of the Act[v].

BRIEF FACTS OF THE CASE

In the instant Civil Revision petition[vi], the petitioner namely, Adie Browson Breweries Pvt. Ltd. intended to set up a brewery in District Gurdaspur, Punjab and thereafter, entered into an agreement with the respondent namely, KLA Construction Technologies Pvt. Ltd., clearly stipulating the terms and conditions of the execution of work pertaining to construction of the brewery. The dispute arose between the parties qua payments to be made for the execution of the work and the respondent being the aggrieved party, invoked the arbitration clause thereby an arbitral award was rendered by the arbitrator in favour of the respondent to which the petitioner filed an objection petition in the trial court at Gurdaspur and the same was dismissed by the trial court, placing reliance on the law laid down in the Indus Mobile case[vii]on the ground that since the ‘seat for the arbitral tribunal’ was not agreed by the parties either through implied or written consent therefore, the ‘Venue’ wherein all the arbitration proceedings took place would be taken as its ‘Seat’, which in the present case is Delhi. The same has been challenged in the instant revision petition which has been duly allowed by the Hon’bleHigh Court.

It was canvassed by the counsel for the petitioner that the ‘seat’ for Arbitration was not agreed upon by the parties (either explicitly or by implied consent) and the arbitral award rendered by the Arbitrator has no mention of ‘Seat’ for Arbitration as enshrined under Section 31 of the Act.[viii]Simply because the arbitration proceedings took place in Delhi and Delhi courts can entertain the challenge to an arbitral award under Section 34[ix] would not tantamount to ousting the jurisdiction of the District Court, Gurdaspur, as the work was duly executed in Gurdaspur. Moreover, the‘jurisdiction clause’ in the agreement entered into between the parties explicitly states that in event of any dispute arising between them, the same would be subject to the jurisdiction of the courts in Gurdaspur only. Therefore even the courts in Gurdaspur can entertain the objection petition other than Delhi.

Both the counsel relied on a catena of judgements to substantiate their claims which have been referred to by the hon’ble High Court while rendering the judgement.

1. One, where ‘Cause of Action’ has taken place and;

2.The other, where ‘arbitration proceedings’ are being conducted;

And the same has to be read in consonance with Section 20(3)[xii]which gives recognition to the ‘party autonomy’ while fixing the ‘venue for arbitration proceedings.’ Thus the Apex Court aptly distinguished the term ‘subject matter of the arbitration proceedings’ from ‘subject matter of the suit’. Furthermore, the Apex Court while reinterpreting the provisions of Section 20[xiii]and Section 2(2)[xiv]went on to expound the contours of the ‘place of arbitration’ stating that a threshold limitation is placed on the applicability of Part 1[xv], where the place of arbitration is in India.

Furthermore, the High Court is of the view that Indus Mobile’s case[xvi] does not hold good in the instant revision petition, wherein the ‘seat of arbitration’ and the exclusive ‘jurisdiction clause’ in the agreement entered into between the parties, have already been ‘determined’ and agreed to by the parties, thereby rightly ousting the jurisdiction of the Delhi court, wherein, the whole arbitral proceedings had taken place.

Furthermore, in  Hardy’s case[xviii], the Apex Court expounded the provisions of Section 20[xix] and Section 31[xx]on the lines of UNCITRAL Model Law wherein the ‘determination’ of ‘place of Arbitration’ has been elucidated in context to powers of Arbitral Tribunal to ‘determine’ the ‘venue of arbitration’ if the same has not been ‘determined’ by the parties to the agreement. The word ‘place’ would be granted a status of ‘seat’ only if conditions precedents; if any, are fulfilled.

According to the High Court in Ashiana Infrahomes Pvt. Ltd. And others vs. Adani Power Ltd.[xxi],being relied upon by the respondent and the parties through their conduct in arbitration proceedings gave their consent which was duly reflected in the orders passed by the court but the same is not true in the instant revision petition as no such order has been passed by the arbitrator. On a similar footing, the High Court rejected the case of Green Builders[xxii], again being relied upon the by the respondent, wherein the issue was in relation to the ‘appointment of arbitrator’ and the stage of ‘determination’ of the seat of arbitration by the arbitrator under Section 20(2) read with Section 31(4) had not yet reached.

The Hon’ble High Court on a bare perusal of the provisions of Section 31(4), Section 20(2) and Section 20(3) of the Act[xxiii], observed that in the absence of any ‘determination’ of the ‘seat of arbitration’ by the parties to the dispute and due to the absence of mentioning of the ‘seat of arbitration’ in the arbitral award and furthermore the ‘jurisdiction clause’ mentioned in the agreement conferring exclusive ‘territorial jurisdiction’ to the courts of Gurdaspur, the arbitration proceedings which took place at Delhi would be considered as a ‘convenient venue for arbitration’ and nothing more. Furthermore, the High Court went on to state that the courts at Delhi would not be conferred with the exclusive jurisdiction to entertain and adjudicate the objection petition.

Henceforth, the Hon’ble High Court opined that Delhi was not the ‘seat of arbitration’ but merely a ‘venue’ wherein the arbitration proceedings shall take place and the courts at Delhi are not conferred with the exclusive jurisdiction but the courts at Gurdaspur also have the jurisdiction to entertain the objection petition by virtue of the ‘jurisdiction clause’ stipulated in the contract.

ANALYSIS OF THE JUDGEMENT

The conundrum as to when a ‘Seat of Arbitration’ tantamount to ‘Place of Arbitration’ and what is the implication of an exclusive ‘jurisdictional clause’ in the written agreement against the backdrop of an arbitration proceeding has aptly been settled down by this judgement. The decision rendered by the Hon’ble Punjab and Haryana Court certainly gravitates towards the conclusion that in order to ‘determine ‘the ‘Seat of Arbitration’it has to pass through a litmus test which can be elucidated in the following manner:

3.In the absence of any express or implied conduct by the parties and no such express mention of ‘place of arbitration’ in the agreement entered into between the parties’; no such adverse inference should be drawn by the court.

The judgement also sheds light on the ‘Territorial jurisdiction of the Courts’ which forms the fulcrum of the case in hand. In order to ‘determine’ the ‘jurisdiction of the courts’, it needs to be ascertained as to where does the ’cause of action’arise and whether the agreement entered into between the parties has any exclusive jurisdictional clause conferring the same upon any specific court. If the arbitration proceedings take place at one place and the exclusive jurisdiction has been conferred to any other specific court, then both the courts have the jurisdiction to entertain the objection petition under Section 34 of the Act.[xxv]

In the light of the above judgement, it can be readily inferred that the words ‘Venue’, ‘Place’, and ‘Seat’ of Arbitration are used interchangeably but in order to ‘determine’ the ‘Seat of Arbitration,’ it has to be construed according to the provisions of the Act[xxvi]in such a manner that the principles of natural justice are not rendered otiose. The ‘territorial jurisdiction of the court’ has to be ascertained bearing in mind the place where arbitration proceedings take place, arbitral award rendered by the arbitrator and the agreement controverting the matter in issue. Understanding the implications of the judgement perhaps the message that gets through is that even in the most mundane of cases, the court has to ensure that unless or until anything specific has been mentioned in the agreement between the parties to dispute, or by the arbitral tribunal or in the arbitral award rendered by the arbitrator, courts should refrain from jumping to a conclusion which might violate the basic tenets of natural justice thereby defeating the basic of purpose of arbitration as a convenient and an efficient way of resolving the disputes amicably. The judgement has certainly been able to unfold the complexities involved in determining the ‘seat of arbitration’ vis- a-vis ‘territorial jurisdiction of the courts’, but there is still much void left in this spectrum which needs to be addressed by the courts.

[i] Section 34 of the Arbitration and Conciliation Act of 1996

[iv]The Arbitration and Conciliation Act of 1996

[viii]The Arbitration and Conciliation Act of 1996

[xiii] Section 20 of The Arbitration and Conciliation Act of 1996

[xv] Part 1 of The Arbitration and Conciliation Act of 1996