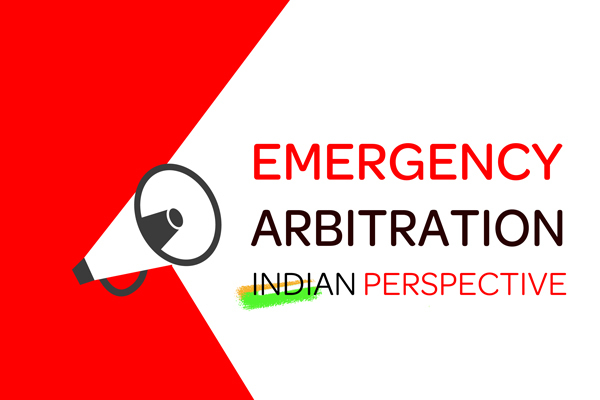 The Singapore International Arbitration Centre[3] was the first Asian institution to introduce emergency arbitration provisions in July 2010, making it an international leader in the number of cases handled.

What is Emergency Arbitration?

Emergency arbitration in the guise of an emergency relief is an upcoming concept in arbitration suitable for parties that cannot wait for the formation of the arbitral tribunal and is aimed to protect their assets and evidence, which may, otherwise, be altered or lost. The person seeking such appointment has to satisfy two elements-

1.Fumusboniiuris – Reasonable possibility that the requesting party will succeed on merits.

2.Periculum in mora– If the measure is not granted immediately, the loss would not and could not be compensated through damages.

The ability of a party to obtain urgent interim relief is central to the success of any method of dispute resolution. In case of disputes that are subject to an arbitration agreement, until recently parties had only two options: either approach national courts for interim relief in support of the arbitration, or wait for the formation of the arbitral tribunal and then make an application for interim relief. The former would essentially require parties to initiate local proceedings before national courts (the avoidance of which may in fact have been the principal reason for choosing arbitration in the first place).

Some parties, therefore, prefer to seek interim measures within the arbitral process. A tribunal once appointed will also generally have wide powers, akin to those of a court, to grant interim relief. The difficulty that can arise is that in some instances the appointment of the substantive tribunal can take months, particularly if one party is obstructive or raises challenges to the nominated arbitrators.

In response, many leading arbitral institutions have introduced emergency arbitrator procedures which seek to close that gap by allowing parties, in situations of emergency, to obtain urgent arbitral relief before the substantive tribunal is formed.

The award is enforceable like an order of the courts in jurisdictions that recognise emergency awards.

Under emergency arbitrator procedures, a sole arbitrator is appointed by the arbitral institute on an expedited basis to determine applications for interim relief that cannot wait for the formation of the substantive tribunal.

Under ICC rules[5] “any party that needs urgent interim or conservatory measures that cannot await the constitution of Arbitral Tribunal can apply for appointment of emergency arbitrator”. The same can be invoked before the institutions which provide for similar provisions.

The institution can set up an Ad hoc tribunal which is capable of granting interim measures or conservatory relief for a stipulated period of time on receipt of an application from the party to the institutional arbitration under contract and is in an emergency and requires a protective or any other interim order. The applicant is required to include in its application the reasons and the justification for emergency relief. The Ad hoc tribunal which has been constituted for a limited purpose and would immediately be dissolved, once the purpose is served or the said time frame in which such issues have to be decided, lapses.

The following procedures, among others, must be adopted when a party chooses the emergency arbitration option:

1.Application in writing to the Registrar.

2.Filing of proof of serving such an application on the opposite party.

3.Payment of the fee, based on the schedule for each centre, where such arbitration is to be carried out with an implicit understanding that the application of emergency arbitration would be limited to signatories to the arbitration agreement or their successors.

The important characteristics of an emergency arbitrator are as follows:

1.Emergency arbitrator has powers to deal with only emergency relief applications;

3.Emergency arbitrator must complete his work within 14 days;

4.Emergency arbitrator cannot continue after the formation of the arbitral tribunal;

5.Emergency arbitrator’s orders can be reviewed or altered by the arbitral tribunal;

6.Emergency arbitrator’s award can be challenged only where the seat of arbitration is located; and

7.Normally emergency arbitrator will not be a part of the arbitral tribunal.

However, the Amendment Act of 2015[22] and 2019[23] failed to incorporate the recommendations of the Law Commission and did not provide at all for emergency arbitration.

The enforcement of a foreign seat award in India is highly unlikely as enforcement of such awards would be governed by the New York Convention on the Recognition and Enforcement of Foreign Arbitral Awards, 1958 and shall only be recognised under part II of the Act[31]. Article 17H of UNCITRAL Model Law[32] specifies that an interim measure issued by an arbitral tribunal would be recognised as binding and can be enforced upon an application to competent court, irrespective of the country in which the award was issued. The award is enforceable like an order of the courts in jurisdictions that recognise emergency awards. However, the Arbitration Act[33] doesn’t contain the provisions regarding the same so an emergency arbitration award passed by a foreign seat is not enforceable in India and an application under section 9 of the Act[34]is probably the only recourse left for the parties to seek interim measures of protection in India.

[27] part III of its arbitration rules, section 18A