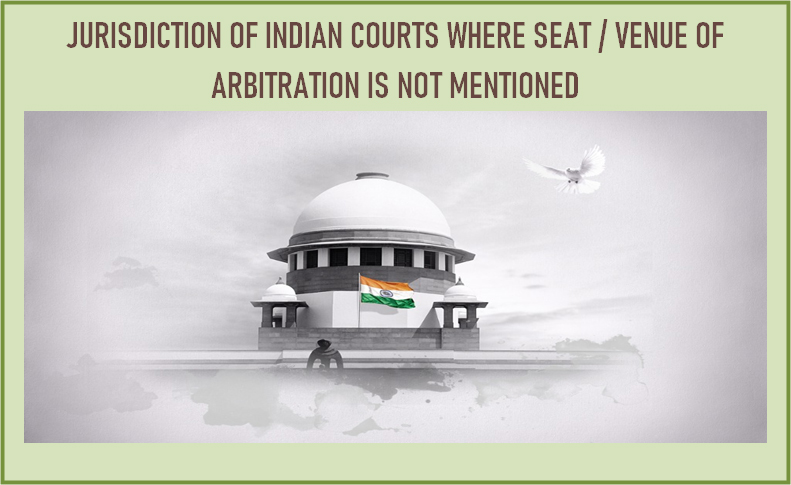 The Delhi High Court in a recent judgment Aarka Sports Management Pvt. Ltd. v. KalsiBuildcon Pvt. Ltd.1 , rejected the Application of the Petitioner seeking Appointment of Arbitrator under Section 11 of the Arbitration and Conciliation Act, 1996 (herein after referred to as “The Act”) on the ground that the agreement between the parties did not provide any Clause for seat/venue of arbitration.

The only contention raised by the Petitioner was, that the Hon’ble High Court of Delhi had exclusive jurisdiction to entertain the petition under Clause 15.15 of the agreement, whereas, the Respondent contended that Clause 15.16 of the agreement was invalid and not absolute as it was subject to Clause 15.37 of the agreement. Also, Delhi cannot be the seat of arbitration as no cause of action arose in Delhi. Moreover, the parties cannot confer jurisdiction on a Court which otherwise has no jurisdiction. The Respondent further submitted that Clause 15.38 stipulates that the parties shall approach the “Court of proper jurisdiction”. Here, the “Court of proper jurisdiction” is the “Court” as per Section 2(1)(e)9 of the Act. Therefore, Delhi High Court was not a competent Court within the meaning of Section 2(1)(e)10 of the Act as the agreement was drawn at Ranchi; signed at Lucknow and performed at Patna.

The Petitioner placed reliance on Indus Mobile Distribution Private Limited v. Datawind Innovations Private Limited11 where the Supreme Court held that Section 2012 of The Act recognizes party autonomy to choose a neutral seat where no part of the cause of action arose. It further held that once the seat is determined, the Court of that place would have exclusive jurisdiction to regulate the arbitration proceedings arising out of the Agreement between the parties. The Hon’ble High Court of Delhi in NJ Construction v. Ayursundra Health Care Private Limited13 followed the Indus judgment. Furthermore, inBrahmani River Pellets Limited v. Kamachi Industries Limited14 , the Apex Court held that since the parties agreed to have the “venue” of arbitration at Bhubaneshwar, therefore, Orissa High Court had exclusive jurisdiction to deal with the matter and not the Madras High Court. In Virgo Softech Limited v. National Institute of Electronics and Information Technology15 , thearbitrationagreement provided that arbitration proceedings shall take place in New Delhi and the Courts at Chandigarh shall have exclusive jurisdiction to entertain any dispute arising therefrom. It was held that the Court at Chandigarh alone had territorial jurisdiction as New Delhi was only a “venue” of arbitration.

Contrary to the Petitioner’s contention, the Respondent relied upon Interglobe Aviation Limited v. N. Satchidanand16 . In this case the Supreme Court held that any Clause which ousts the jurisdiction of Courts having jurisdiction and confers jurisdiction on a Court not otherwise having jurisdiction, would be invalid. The parties cannot by agreement confer jurisdiction. Moreover, in GE Countrywide Consumer Financial Services Limited v. Surjit SinghBhatia17 , the Hon’ble Delhi High Court rejected the application for appointment of Arbitrator on the ground that the loan was applied and disbursed at Ahmedabad and no part of cause of action arose at Delhi, even though the arbitrationagreement stipulated the place of arbitration to be Delhi.

The single bench of the Hon’ble High Court of Delhi agreed with the argument raised by the Respondent, to hold that it has no territorial jurisdiction to entertain this petition as Delhi was not the seat of arbitration; no cause of action arose in Delhi and the Respondent did not work in Delhi. The agreement was drawn at Ranchi, signed at Lucknow and performed at Patna. Since the agreement did not provide for the seat of arbitration, the Court within the meaning of Section 2(1)(e)18 of The Act read with Sections 16-20 (relevance on section 2019 ) of the Code of Civil Procedure, 1908 would be competent to entertain an application under Section 1120 of The Act. Also, Clause 15.121 is not valid as the parties cannot confer jurisdiction on a Court which otherwise has no jurisdiction. Not only this, Clause 15.122 was subject to Clauses 15.223 and 15.324.

1Arb. P. 662/2019 decided on 6th July, 2020.
215.3: Arbitration- Any Dispute which is not settled by Mediation, shall be determined by Arbitration under the Arbitration and Conciliation Act, 1996, as amended by the Arbitration and Conciliation (Amendment) Act, 2015. The Arbitration shall be conducted before a sole arbitrator appointed with the mutual consent of both Parties. If the Parties are unable to reach an agreement on the choice of an arbitrator within 30 days of the Notice of Arbitration by either Party, the Parties shall approach the court of proper jurisdiction for appointment of arbitrator
315.1: This Agreement shall be governed by and construed in accordance with the laws of India and subject to clauses 15.2 and 15.3, the jurisdiction of this Agreement shall be exclusively in the courts of New Delhi, India.
411(6): Where, under an appointment procedure agreed upon by the parties,—

5Supra 3.
6Ibid.
7Supra 3.
8Ibid.
92(1)(e): In the case of an arbitration other than international commercial arbitration, the principal Civil Court of original jurisdiction in a district, and includes the High Court in exercise of its ordinary original civil jurisdiction, having jurisdiction to decide the questions forming the subject-matter of the arbitration if the same had been the subject-matter of a suit, but does not include any Civil Court of a grade inferior to such principal Civil Court, or any Court of Small Causes.
10 Ibid.
11 (2017) 7 SCC 678.
12 20: (1) The parties are free to agree on the place of arbitration.
(2) Failing any agreement referred to in sub-section (1), the place of arbitration shall be determined by the arbitral tribunal having regard to the circumstances of the case, including the convenience of the parties.
(3) Notwithstanding sub-section (1) or sub-section (2), the arbitral tribunal may, unless otherwise agreed by the parties, meet at any place it considers appropriate for consultation among its members, for hearing witnesses, experts or the parties, or for inspection of documents, goods or other property.
132018 (168) DRJ 274.
14(2019) SCC OnLine SC 929.
152018 SCC OnLine Del 12722.
16(2011) 7 SCC 463.
172006 (89) DRJ 73.
18Supra 9.
1920: Other suits to be instituted where defendants reside or cause of action arises- Subject to the limitations aforesaid, every suit shall be instituted in a Court within the local limits of whose jurisdiction-

20Supra 4.
21Supra 3.
22Ibid.
2315.2: Negotiation: The Parties shall negotiate in good faith and use reasonable efforts to settle any dispute, difference or claim raised, arising out of or in connection with this Agreement including the construction, validity, execution, performance, termination or breach hereof (hereinafter referred to as ‘Dispute’). In the event that the Parties are unable to reach a resolution within 30 (thirty) days of the start of Dispute the same shall be settled by binding arbitration.
24Supra 3.