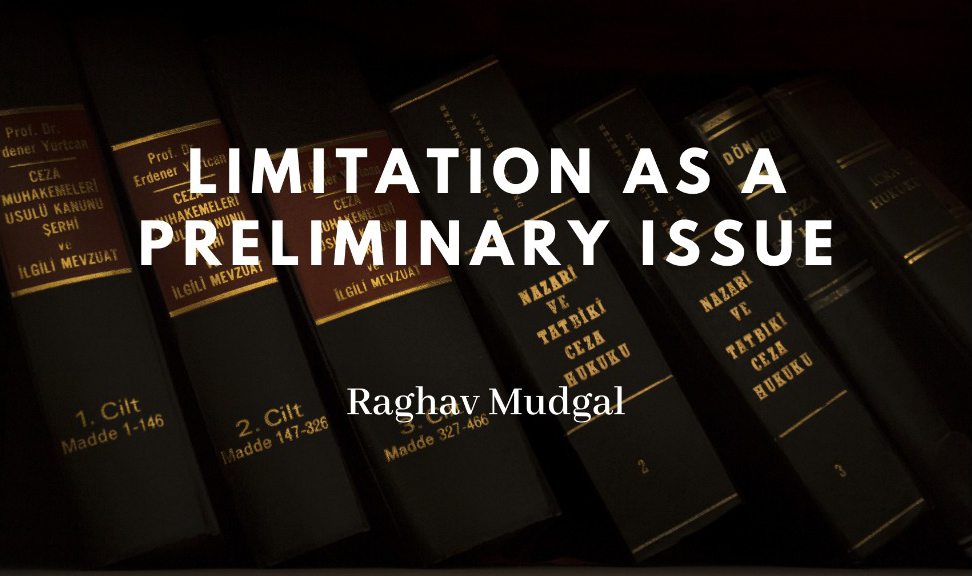 Period of limitation is a timeframe prescribed by law within which a suit, appeal or an application has to be made, beyond which it will be liable to be dismissed. Section 31 of the Limitation Act, 1963, lays down that every suit instituted, appeal preferred, and application made after the prescribed period i.e. the period of limitation shall be dismissed, even when limitation has not been set up as a defence. The Civil Procedure Code, 1908 (hereinafter referred to as Code) provides in Rule 11 (d) of its Order VII2 that a suit which appears from the statement in the plaint to be barred by any law, as the case may be under Section 3 of the Limitation Act, shall be rejected.

A preliminary issue can be described as a distinct element of a dispute that has the potential to decisively conclude the claim, or a substantial part of the claim, or otherwise substantially cut down on the scope and costs of the litigation. Rule 2 of Order XIV of the Code3 deals with the framing of preliminary issues. It States that the Court is to pronounce judgment on all issues:-

This blog aims to look at the nature of question regarding limitation and whether a question of limitation can be tried as a preliminary issue.

CAN MIXED QUESTIONS OF LAW AND FACTS BE DECIDED AS PRELIMINARY ISSUE?

Rule 2 of the Order XIV of the Code was substituted by Section 64 of the Code of Civil Procedure Code (Amendment) Act, 19764. Prior to the amendment, the rule read as follows-

Where issues both of law and of fact arise in the same suit, and the Court is of opinion that the case or any part thereof may be disposed of on the issues of law only, it shall try those issues first, and for that purpose may, if it thinks fit, postpone the settlement of the issues of fact until after the issues of law have been determined.

In 1964, the provisions of this rule came before the Apex Court for consideration in the case of Major S.S. Khanna vs. Brig. F.J. Dillon6 (hereinafter referred to as Major SS Khanna Case) where it was held that only where the court is of the opinion that the whole suit may be disposed of on the issues of law alone that the jurisdiction to try issues of law apart from the issues of fact may be exercised, but it is pertinent to note that the Code confers no jurisdiction upon the Court to try a suit on mixed issues of law and fact preliminarily. It further held that normally all the issues in a suit are to be tried by the Court and it shall not do so in situation where the issues, even of law, depend upon issues of fact, would result in lopsided trial of the suit.

The substituted Rule came in force on 1st of February, 1977. The Rule was substituted to provide that although a suit can be disposed of on a preliminary issue, the Court shall ordinarily pronounce judgement on all issues; but where any issue relates to the jurisdiction of the Court or a bar created by any law for the time being in force, the Court may postpone settlement of the other issues until the preliminary issue with regard to the jurisdiction of the Court or such bar has been determined and the Court may deal with the suit in accordance with the determination of such preliminary issue.

Though there has been a slight amendment in the language of Order XIV, Rule2 Code of Civil Procedure by the amending Act, 1976 but the principleenunciated in decision in Major SS Khanna Case still holds good with respect to the principle that the Code confers no jurisdiction upon thecourt to try a suit on mixed issues of law and fact as a preliminary issue andwhere the decision on issue of law depends upon decision of fact, it cannotbe tried as a preliminary issue.

In Ramdayal Umraomal vs. Pannalal Jagannathji7 , a Full Bench of Madhya Pradesh High Court has observed that under Order XIV, Rule 2, mixed questions of law and fact requiring recording of evidence cannot be tried as a preliminary issue.

The Apex Court in the matter of Ramesh B. Desai and Ors. vs. Bipin Vadilal Mehtaand Ors.8 (hereinafter referred to as Ramesh Desai Case) held that in the case of a disputed question of fact, the question of limitation cannot be decided as apreliminary issue without a decision on facts based on the evidence that has to beadduced by the parties. The Court has no jurisdiction Under Order XIV, Rule 2 of the Code todecide a mixed question of law and fact as a preliminary issue.

CAN LIMITATION BE DECIDED AS A PRELIMINARY ISSUE?

In the case of Nusli Neville Wadia vs. Ivory Properties and Ors.9 (hereinafter referred to as Nusli Neville Wadia Case) the Apex Court is of the opinion that it is permissible for a Court to reject a plaint barred by limitation under Order VII, Rule 11(d) of the Codewhere the plaint averment itself indicates the cause of action to be barred by limitation and no further evidence is required to adjudicate the issue.

The Apex court had held in the case of Narne Rama Murthy vs. Ravula Somasundaram and Ors.10 that even if it is apparent from the plaint averment only, that suit is barred by limitation, it can still be tried as a preliminary issue even in the absence of plea of limitation raised by the Defendants.